The night was still, everything seemed transfixed, as though enchanted. Not a single sound could be heard but the forest was just awakening, brimming with life. The noise of the crickets only deepened the silence that spread among the wild bushes and scattered amid the undergrowth. Yet, scuttling here and there, were creatures of the shadows nestled close together, right beneath the ground. A strong odour, rich with damp, moss and dried leaves rotting untouched, settled heavily in the air like dust left in an ancient room for centuries. Not a breeze blew through the trees, not an extra leaf was shed, the clouds above glided by swiftly. Floating with an agility almost envious. Weightless, fluid, their movements enchanted our little passerby as she looked towards the sky. Her eyes sparkled in the moonlight as she softly kneaded the earth under her feet. Glancing up momentarily, before the white orb got swallowed behind the veil of clouds again. She circled around, tapping her feet lightly, playful, alert, dancing in her own shadows. Her red coat glistened with drops of dew, softly lingering, longing to drip but unwilling to part from her warm fur. Suddenly there was light again, and this time she yearned for that shining white ball up high. She jumped a little and let out a low growl of disappointment when her claws couldn’t reach it. She wanted to capture the moon and play with it, pawing it on the dirty soil, nibbling it and nudging it with her muzzle, sniff its scent so she could find its trail no matter how far it rolled away. Just when she was about to give up, she saw it in front of her, right there, a few inches from her paws. Rippling, tremulous but the same white ball of light indeed. She plunged into the middle of the puddle and grappled with all her might, determined not to let it slip away this time. But the moon scattered into fragments as she looked into her own eyes and stared in disbelief, searching for her lost toy.

The riff raffs of the guitar hums in my ears softly, gently lulling me as I sit perched on my window sill for better internet connection. My feet dangling outside, wedged between the rods to keep me from tumbling out. The moon stays hidden behind the clouds, the soft breeze that blows is laden with moisture. The humidity rests heavily around the hills, covering the tips and merging them into a grey shadow beyond. Whether they are clouds or it’s too dark for my eyes to discern, I’m not so sure. Something makes me nostalgic. I can tell the longing, the yearning even as I close my eyes and try to tune out the odd thoughts that flit back and forth, restlessly. It’s like missing something but not quite remembering what you’re missing. An old habit or perhaps a new face, that you had grown accustomed to. Little things, cigarette wrappers and green scrunchies tug at your memories. The craving crawls back like the receding wave crashing ashore again. I reach out for another drag and slightly blow out rings. I’m not good at it and the Os dissolve quickly into the darkness, carried away with the wind. Nights like these seem particularly long and strangely still.

Since when do we start having insecurities?

Was it the first time your friend in class called you out for having a big nose or your playmates teased you for having gaps in between your teeth?

Words have such power, and children often yield this dangerously, without any prior understanding of the nuances of how hurtful some of these innocently, unintentional remarks can be to others at the receiving end. But children we can still afford to forgive or forget, what of people who we look up to for acknowledgement and recognition?

When judgement comes from older people, that’s when it becomes agonising, miserable. When they snub you before you can speak up in your own defence, you see in our culture, you’re not supposed to talk back to your elders, they can call you dark-skinned though, out of superficial concern exclaim in disbelief how consistently skinny or short you are. They might mock your upturned nose and laugh at your puberty freckles in front of the whole family gathered there, as if you were the laughing stock, but when they do it, it’s supposed to be harmless, all in good cheer while you stand there blushing and wishing you could turn invisible. They would comment on how unruly your hair is or how broad your cheekbones, slightly click their tongues in disapproval if you ask for another roti, remind you how fat you have become or reprimand you for how inappropriately dressed you are… since they are elder than you, they have the liberty to say all those words. Pass them around like a bottle of ketchup at the dinning table, whisper in subdued voices, sometimes behind your back, sometimes straight at your face with an indulging smile wrapped in the disguise of unsolicited advice.

These words settle down in our minds like small poisonous darts, turning our blood slowly blue, inconspicuously. Until our whole appearance and personality becomes insignificant, crushed under their high heels like stomping on a cockroach out of disgust. At some point in your life, you start questioning yourself, why am I me? You carry these words around like medals around your neck, only not of gold silver or bronze, neither jade, just iron chains to trap you forever in a dense fog of hatred for yourself. Self-loathing becomes so internalised, that the sharp voice of criticism only keeps getting louder as you grow up and even when they stop pointing out your blemishes, your own eyes seek them out as you stand in front of the mirror. 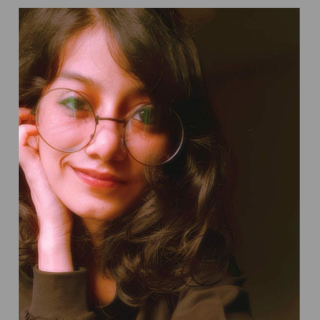 Indian author and lover of literature with a curiosity about films. I love writing poems, memoirs and short stories. Can't stop petting cats. When alone, I like to doodle sometimes or play my ukulele.

If you enjoy reading my works and wish to support this blog, kindly buy me a coffee! Thanks for all the love!!!